A box of coloured pencils & love 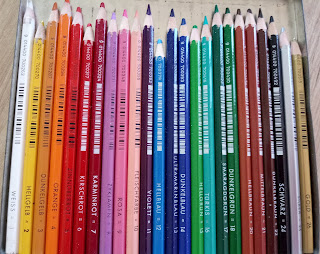 There are some gifts that mean a world to me. This is a story about my beloved box of coloured pencils.

It was 18 years ago when I just moved into a new flat with my husband. We went on a first shopping together in a big supermarket. While shopping for food I noticed a huge pile of boxes of coloured pencils, each box contained 24 coloured pencils. The brand was Jolly... it is an Austrian brand that has been hugely popular since my childhood.  When I was a child it was impossible to buy them in my country (=ex-Yugoslavia), so once my parents drove to Austria and smuggled them (together with coffee and all other stuff that was impossible to buy here). I got a box of 12 Jolly coloured pencils when I was 7 years old and I had those pencils for more than 10 years.

I told this story to my husband. And I told him that all my childhood I wished to have a larger box that would contain 24 coloured pencils, not only 12. But I never got them since they were to expensive.

My husband took one Jolly box and put it into the shopping charts. I asked him what was he doing. He told me that he wanted to buy me the large box of coloured pencils that I wished my whole childhood.

I was deeply touched. I told him that I didn't need the coloured pencils. And he replied that it didn't matter, that he wanted to buy them anyway.

I think this is the gift that means the most to me.

And it wasn't true that I didn't need the big box of coloured pencils. I needed them, I just didn't know I needed them :)