We need to talk about Kevin

I am too busy enjoying myself in Kuala Lumpur, so this post will be very short :)

I love travelling so much, it is our second day in KL. We like the city, but it so hot and humid... so we are really looking to Cameron Highlands tomorrow for couple of days.

On the flight I watched lots of movies. The one that really stayed with me is We need to talk about Kevin: http://www.imdb.com/title/tt1242460/

Have you watched the movie? A great movie for any infertile woman :)

We have a flight to Asia in few days and have to organize million of things before we go. So I literally have no time for any after-infertility thoughts. Which is good :)

The legs on the photo are not mine, but I hope I will be able to make a similar photo soon. Currently I am struggling with finding a room on Perhentian Islands (they are supposed to be paradise, obviously lots of tourist have heard it).

And now I have to spend as much time as I can walking the Wolf before I go. I will miss him!

This is the biggest advantage that I see in being childless/childfree. We can just pack our rucksacks, take some clothes, LP guide and forget about real life for couple of weeks (forget about everything except the Wolf). Isn't it  great?? 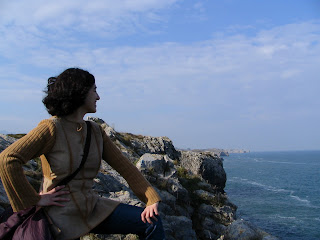 ***
Maria... if you see me typing these lines... I hope you know that I loved you. I miss you. I wish you and your baby sweet dreams. The two of you are my guardian angels now.
Posted by Klara at 7:29 AM 7 comments:

and I loved it!!!  I couldn't agree more with you.

I have just seen news on FB: a friend of mine just had a baby girl. I am really happy for her & sad for me. As always, when a new baby is born.

I met my Aussie friend 11 years ago, when I was working for one month in Germany. We instantly got along and only few weeks later she visited me in Slovenia. After that we met for few times, we always had a great time together.

Also their story was not an easy one.. the baby girl is a miracle baby from their 4th IVF attempt.

***
One of the nicest invites that I ever got was from this Aussie friend, in autumn, after failed 10th IVF. She invited me & DH to live with them for a month or few months.... if we decided to try luck in the best infertility clinic in Melbourne. Isn't that sweet? I will be always grateful for this invitation.

But I am done with hoping & trying & infertility drugs & IVFs. When we go to Australia (in the next few years), it will be only for holidays.
Posted by Klara at 7:34 PM 2 comments:

I had a nice long Easter weekend despite all the rain (my dog enjoys walks in all kinds of weather). And yesterday I had a visit: my sister and her 2-year-old daughter came for a visit. It was lovely to see them: I missed them both (her daughter is one of the sweetest children I have ever seen).

Here is the news. My sister is highly pregnant, she will have a baby in few weeks. And for the first time since our infertility journey began, I am actually looking forward to a new baby! It really seems that I am on a road to recovery.

To be frank - I am looking forward to the baby. But I still want to avoid all the exciment in the family, all the celebrations etc... so... Asia, here I come :)
(baby will be born during our holidays)
Posted by Klara at 9:02 PM 4 comments:

There are 11,541 empty red chairs in Sarajevo today. One for each victim of the city.

Ceremonies in Sarajevo are marking 20 years since the start of the war in Bosnia-Hercegovina, a conflict that saw the worst atrocities in Europe since World War II.

The conflict began in April 1992 as part of the break-up of Yugoslavia.

About 100,000 people were killed and nearly half the population forced from their homes in four years of fighting.

People have been placing white flowers on some of the chairs as they walk alongside them.

A teddy bear, toys and schoolbooks have been placed on some of the small chairs which symbolise children killed during the four-year long siege by Serb forces.

Sarajevo is only aproximately 500 kilometers away from my city. So close!

PS: I used some text from today's BBC website. I wanted to use proper English in this post. Sarajevo deserves it.

PPS: Sarajevo is a beautiful city. You should visit it at least once in your life.
Posted by Klara at 7:27 PM 5 comments:

Injections? No, thank you.

I am glad that we cancelled IVF with egg donation that was already booked for end of April. If we wouldn't cancel it, I would be already on injections, suffering all kind of side effects.

Anyway, I am happy that I will be able to enjoy drugfree Spring & Summer.

And I am happy never ever in my life to take any infertility drugs again.
Posted by Klara at 6:25 AM 4 comments: