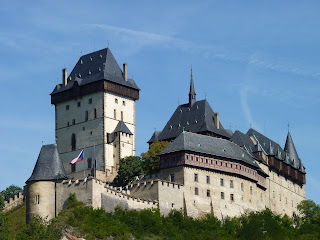 I spent most of the years 2009 & 2010 & 2011 thinking about using an egg donation. It was a tough decision, but after 9 failed IVF it felt that this was an option that we should consider.

We have chosen a clinic in Brno, Czech Republic. And we really liked it - they were really professional. My donor was 23 years old (so young!!). I had transfer of two expanded blastocysts. When they were implanting the embryos, there was this song: http://www.youtube.com/watch?v=BcL---4xQYA

We were so sure that our 10th IVF (and 1st using donor eggs) will work out. Everything was magical. We spent one wonderful week in Czech Republic and fell in love in a country. There we saw the most beautiful castle (attached photo) - Karlštejn, near Prague.

We had even nick names for our babies - old Czech names - František & Eliška.

Whenever I hear Led Zeppelin's Stairways to Heaven it reminds me of an old dream that never came true.

If František & Eliška had decided to stay with me, they would be born within few days. Can't believe that less than 9 months passed since then. Seems likes ages ago!

I know that if  František & Eliška were born, I would love them more then anything in the world.

But after thinking about everything for additional 9 months, I saw some further negative sides of an egg donation (list became quite long in the last few months). And on the top of it - the drugs that you have to take really have so many side affects. I just do not want to take any infertility drugs, never again.

It makes me sad - thinking about all the embryos that I carried under my heart (only for few hours or days, since I never ever saw the magical plus). There were approximately 10 that were genetically ours (I don't really want to count the exact number, it is just too sad). And then František & Eliška.